LC-MS may be performed on the Orbitrap only by special arrangement with the Facility, on a collaborative basis. Please contact the Facility Manager for details.

MS/MS may be performed by special arrangement with the Centre, usually on a collaborative basis. Please contact the Facility Manager for details. Different methods of tandem operation are available, in various ionisation modes:
Collision induced dissociation (CID), HCD (high energy CID) or PQD (pulsed-Q dissociation) on Orbitrap XL, with selection of precursor ions at low or high resolution and accurate mass of fragment ions (ESI, nESI or APCI) 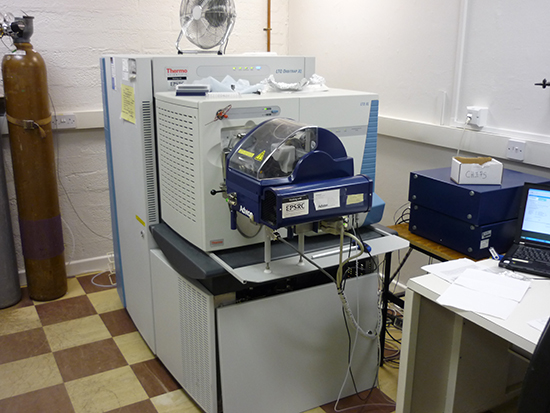 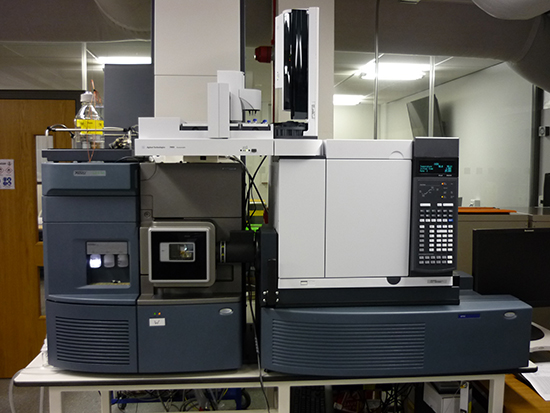 ESI analyses are generally performed on the Orbitrap XL or Xevo G2-S using nanoelectrospray. Printouts will clearly state on the top whether nanoelectrospray or pneumatically-assisted electrospray has been used (see both methods below). The spectra achieved by both methods are similar; only the inlet and rate of sample consumption differ. For both spray rates, different source ("cone") voltages may be used to either promote molecular fragmentation ("harder" ionisation) or to minimise it and promote multiple charging ("softer" ionisation). Spectra are labelled appropriately when different source voltages give different results. Electrospray data acquired on the Orbtirap to m/z 2000 are generally also "accurate mass measurements" (5 ppm guaranteed; usually better than 3ppm).

Analyses are performed in positive or negative ionisation mode (one polarity per analysis). The Advion NanoMate inlet is used with a 96-well plate, corresponding transfer tips and 400-nozzle spray-chip. (With this inlet, each sample uses its own well, sample tip and nozzle, effectively eliminating the "memory" problem that is common with standard electrospray.) Solvents and additives used are listed on the results. Orbitrap XL conditions: see SOP document.

Electrospray: analyses are performed in positive or negative ionisation mode. Samples are loop injected into or infused in a stream of water / methanol (1:1 at 50µL/min.) using the customer-specified solvent for dissolution. Nebulisation is pneumatically assisted by a flow of nitrogen through a sheath around the capillary, a process sometimes referred to as "Ion spray". See Orbitrap SOP for more information on this instrument. Orbitrap XL conditions: see SOP document.

Accurate mass Electrospray (ESI) is the preferred laboratory method. Other techniques will only be used if ESI fails. If both a full-scan characterisation and accurate mass are required, both are done simultaneously. If only a single ion accurate mass measurement is required, it may be performed on the Orbitrap XL or on the Xevo G2S in positive or negative ionisation. 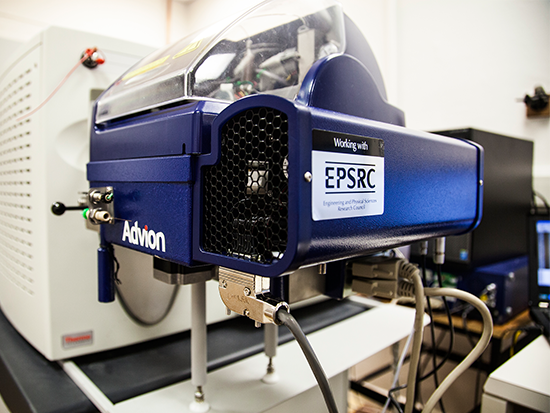 APCI in this laboratory is performed on the Orbitrap XL and on the Xevo G2S using the Atmospheric Solids Analysis Probe (ASAP) to insert samples into the APCI source. (Traditional flow injection APCI is also available but is rarely required). Samples are deposited onto a glass capillary as a solid or in solution. Additives such as ammonium acetate may also be used on the probe or in the ion source, to assist ionisation.

Atmospheric Solids Analysis Probe (ASAP) conditions: Source Temp.: sample dependent. If the vapourizing temperature is unknown, the sample is introduced at ambient temperature (circa 40ºC) then the temperature is increased until the sample vaporizes.
Corona Discharge Current: 4 µA.

Accurate Mass APCI is also carried out using ASAP under the above conditions. For instrument calibration, please see Orbitrap SOP document (instrument is calibrated using ESI). Accurate mass is obtained on all ions in the spectrum simultaneously. APCI by direct infusion is available upon request.

GC-MS is performed on the Waters GCT Premier using EI or CI, with ammonia (or methane), in either polarity. Accurate mass GC-MS can also be performed using the GCT Premier. The stationary phase of preference is DB5 (95% methyl and 5% phenyl). GC conditions depend on those specified in the analysis request. 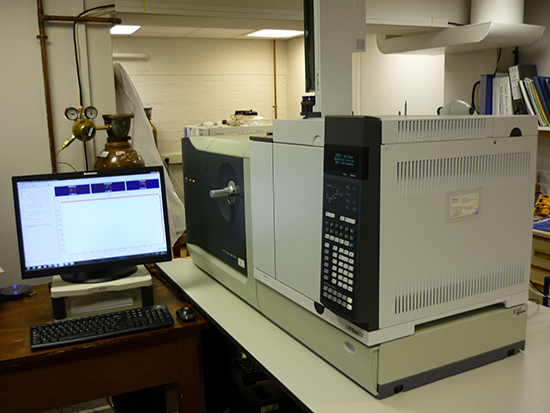 EI and CI analyses are generally performed on the MAT95 magnetic sector low molecular weight, volatile, for metal-containing species, and when there are special sample requirements, e.g. air sensitive or insoluble samples.

Accurate mass Electron Ionisation (EI) and Chemical Ionisation (CI) measurements, in positive ionisation mode, are obtained on the MAT95 by "peak matching", with mass resolution between 8000 and 10000 (10% valley definition). For EI, Heptacosa (perfluorotributylamine) is the usual reference compound for accurate mass measurement, and for CI, PEG (polyethyleneglycol) is usually used. If a different reference compound is used, it will be specified in an attachment to the result. Precision of the method is better than 5ppm and nearly always within 3 ppm. Usual mass range is 50 to 1000 Da but higher is possible; measurements of molecular masses over 1000Da are usually discouraged as being a meaningless exercise.

EI electron energy 7 0eV; either the water-cooled or desorption probe is used, as required; source temperature depends on sample.

CI source temperature ca. 140 °C and electron energy 50eV; either the water-cooled or desorption probe is used, as required. 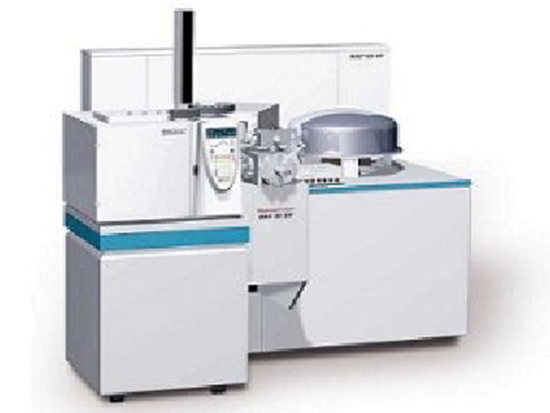 MALDI is performed on Bruker ultrafleXtreme mass spectrometer. A typical procedure involves mixing solutions of sample and matrix, and pipetting 0.5-1 microlitre onto the target well of a sample plate. Inorganic salts are sometimes added to promote ionization. The sample spot is dried, allowing co-crystallisation of the mixture, then irradiated with a laser. Solvent-free preparations can also be used. The matrix is ablated from the plate while the sample is simultaneously desorbed and ionised, then accelerated into a flight tube (typically 20kV). The instrument may be run in any combination of positive or negative and linear or reflector modes. Specific details regarding conditions will accompany results. 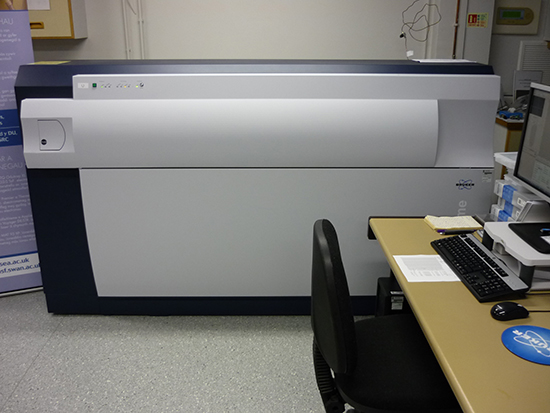 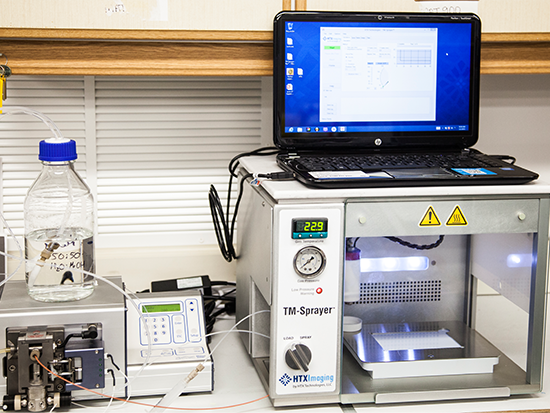 Thank you for contacting Swansea University!

A member of the mass spectrometry research facility will be in touch shortly.

There was an error submitting the form. Please close the window and try again later.

Your data will be processed in accordance with Swansea University's Data Protection Policy.